view all insights
Posted on December 19, 2022 by Omicus
Posted under: Articles

How Corner Stores Are Crucial in Underserved Communities 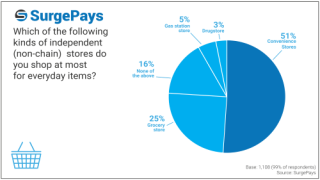 The perception of neighborhood grocery stores as both a hub and heart of communities – especially underserved communities – was affirmed in a recent survey. According to insights from technology and telecommunications company SurgePays, Inc., an overwhelming 94% of consumers say that their local independent grocery, c-store or bodega is important to their friends and neighbors.

It’s a fairly even split on the degree of importance. About a third (34%) of survey respondents said that nearby indie locations are very important, while another 34% said they are somewhat important and 26% said those retailers are extremely important.

The results speak to the important role of local grocers in underserved neighborhoods. SurgePays, which provides mobile broadband to low-income consumers and works with corner stores to become tech hubs for underbanked areas, enlisted its survey firm to oversample for adults with a household income under $25,000 and without bank accounts or credit cards.

SurgePays’ survey also found that consumers in underbanked and underserved areas are twice as likely to go to a nearby c-store almost every day (14%) compared to the general population. More than a third take part in SNAP. As for what they are buying, the survey revealed that top categories are snack food (71%), coffee/beverages (50%) everyday foods and meals (48%), milk (47%) and lottery tickets (32%).

Shopping is a personal experience for those who frequent corner stores. The poll shows that 37% of customers who patronize nearby independently-owned or operated c-stores say they know the name of their favorite clerk or owner.

To comply with some government regulations, we're letting you know that this site uses cookies.

By continuing to browse our site, you're agreeing to our use of cookies. Learn more

This website uses cookies so that we can provide you with the best user experience possible. Cookie information is stored in your browser and performs functions such as recognising you when you return to our website and helping our team to understand which sections of the website you find most interesting and useful.

Strictly Necessary Cookie should be enabled at all times so that we can save your preferences for cookie settings.

If you disable this cookie, we will not be able to save your preferences. This means that every time you visit this website you will need to enable or disable cookies again.

More information about our Learn more